How to Get the Love You Deserve

We always get the love we deserve. The real question is: Are we doing what we need to do to earn the love we WANT?

The word “deserve” brings up feelings of entitlement or inadequacy. We either feel we deserve more love than our partner is giving us or that we’re not deserving of the love we actually want. Instead, reframe your analysis of the term “deserve” to think of it as “earning” the love you want.

When we’re talking about partnerships and relationships, the question of engagement always comes up. It applies to all our interactions, whether it’s in business or in our personal lives. Are you fully engaging with those around you? Are you using conflict as a way to get the most out of your relationships?

We often think of conflict as a negative thing, but really, it’s conflict that causes changes and growth. You cannot change or get stronger without resistance. If you’re smoothly sailing along and going through life “conflict free” then you’re either fooling yourself, lying to yourself, or you have your head in the sand. By the very nature of being human, we face conflicting wants, desires and yearnings. Getting to the heart of these is what helps us connect and find ways to fulfill the needs and desires we have.

Behind every “ugly fight”—where the couple gets stuck in a cycle of blaming and defending or stuck in the drama triangle—is an underlying truth. There’s something that isn’t being fulfilled. It may be an unanswered yearning or built up resentment.

Growing and transforming within your relationship is about fighting fair. Not avoiding the fight all together, but engaging in a productive and respectful discussion in which you express your issue and open up the heart of the conflict. There are a few rules of engagement that can help you ensure fights are productive and fair. Rooted in personal responsibility, these rules are for both sides of the partnership, but even if only one side follows, there will be a vast improvement in communication and engagement.

No matter if you’re single, married, or trying to apply the rules of engagement at work or with friends, you’ll find that if you follow the rules, your conflicts will become more productive. Your personal responsibility will be realized and you will approach things in a way that will help meet your yearnings and foster growth and deeper engagement.

If you follow the rules and both sides of the couple are learning and growing together and sharing their yearnings with each other, they’ll both get the love they want.

You’ll be able to read all about these ideas and more in Dr. Bob and Judith’s Wright’s new book coming out in February 2016: The Heart of the Fight: A Couple’s Guide to Fifteen Common Fights, What They Really Mean, and How They Can Bring You Closer. (Available for preorder now!)

Listen to this episode here on BlogTalkRadio or here on iTunes. Kate Holmquest is a coach, curriculum developer, and campus director for Wright and the Wright Graduate University for the Realization of Human Potential who believes that dating is one of the best possible playgrounds for discovering and transforming yourself! Potential movie titles that describe her quest for satisfaction in single life are “40 First Dates” (a.k.a. dating with velocity), “Ten Things I Hate About You” (a.k.a. telling the truth on dates), and “The Thing About My Folks” (a.k.a. noticing and breaking the relationship rules I learned at home). How To Find Love: You Must Discover Yourself First 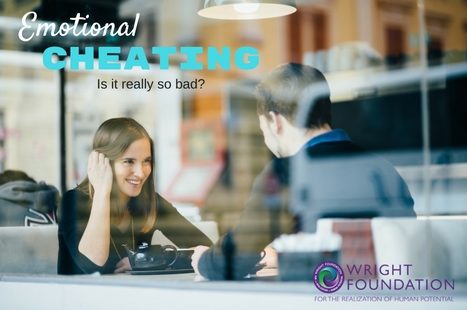 Emotional Cheating: Is It Really So Bad? Love Is Messy:Learn the Secret to Awesome Relation...